Mr. J. stared at his meal, but did not pick up his fork and start to eat the broiled whiting or mashed potatoes on his white plate. A look of confusion clouded his features. The resident of PioneerVillage was encouraged by the staff to eat, but could not see his food clearly on the white plate. He had not forgotten his glasses: he didn’t wear glasses. Mr. J. could not see the white fish or mashed potatoes on his plate because he has Alzheimer’s and it can be really difficult for people afflicted with that disease to see some kind of foods on a white plate. The simple, elegant solution to this problem is simply to change the color of his plate. In a study conducted at Boston University, researchers found that patients eating from red plates consumed 25% more food than those eating from white plates. 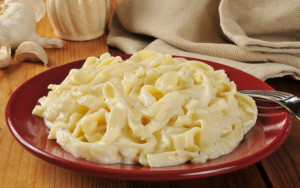 Perhaps one day Mr. J. will look at the food on his red plate, throw up his hands and cry, “How do you expect me to eat all this? I can’t eat so much food.” You look at his plate and see only a slice of ham, three small potatoes, and some peas. To you, it doesn’t look like a lot of food, but to someone with Alzheimer’s, just three things on a plate can be overwhelming. The solution to get him to eat his meal is to serve each item one at a time on a small plate as if serving a three course meal. That way, Mr. J. only has to deal with one item of food at a time and is more likely to eat it. Some patients with short-term memory loss may even think of each course as a new meal.

Another problem Mr. J. might have related to eating less is that he can’t taste his food because, like many people with Alzheimer’s, he has lost his sense of smell, which helps us taste our food. To find out if he is having this problem, put a number of cooked foods under his nose, such as pungent sauerkraut or cinnamon apple cobbler, and watch his reaction. If he doesn’t react to the food, his sense of taste might be compromised. The simple solution to this problem is to increase the seasoning of his food to make the taste bolder.

If you assist someone with Alzheimer’s, these tips may make it easier to provide food for the person in your care.

Gail joined BSN Solutions as a Regional Director in March of 2013. Her role is to promote the adoption of the new dining standards and person-centered dining throughout the communities serviced by BSN Solutions. She also recruits, coordinates placement of, and supports the dietitian consultants who work with BSN Solutions in its client communities. Gail has a vast 30+ year background in long-term care, having worked within skilled nursing and rehab centers in clinical and management capacities. She holds a Master’s degree in Healthcare Administration as well as a Bachelor of Science degree in Human Nutrition.
View all posts by Gail Douglas →
This entry was posted in Communication and Problem Solving, Food Prep and Recipes, Quality Measures. Bookmark the permalink.