Stories from the Front Lines of Food Safety: Rats in the Kitchen: Part 2 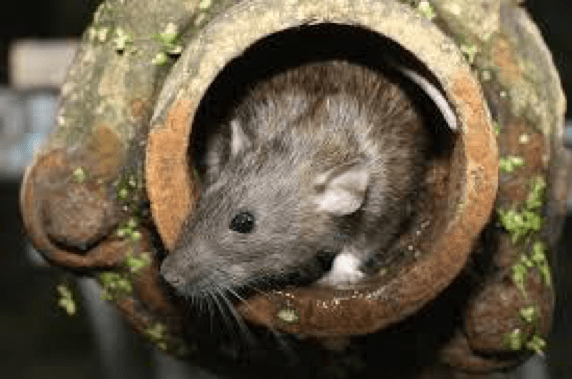 “There are rats in the kitchen of the nursing home where we work,” read the anonymous complaint submitted to AHCA (Agency for Health Care Administration), the agency where I worked as a surveyor. If true, this was a potential violation of the Food Safety and it was time for me to head into the trenches in the war against contamination.

Central Supply Room Across from the Kitchen

Observation revealed rodent tracks in the red plastic container in with the urinary drainage bags. Central Supply Clerk stated that the rats liked the Med Pass®, a nutritional supplement, and lotion with olive oil so she put the lotion in a sealed box and the Med Pass® in the hall medication rooms. She went on to say the rodent problem was much better than it was a few months ago. Supply Clerk  said maintenance staff placed traps in central supply during the week but removed them during the weekend.

During a telephone interview, the previous Maintenance Director said that evidence of rats was found in the dry food storage area in January and the pest control company set traps that caught a few animals now and then.

Return to the Main Problem Area

A second review of the dry food storage room revealed a plastic pipe where the canned food was stored. The pipe was coated with urine and rat feces. On numerous sections of metal shelving, the food packaging was clearly contaminated with a dried yellow substance. Underneath the shelving was a large stain on the floor that the Kitchen Supervisor said looked like dirt.

CDM was asked if he discarded food when he learned about the rodent infestation. He said he did not because staff cleaned the top of the cans before emptying the contents. He also did not remove the labels or sanitize the can before opening. In fact, he failed to take any action to address the contaminated food.

When CDM was asked if the dry food storage room had been thoroughly cleaned, the Kitchen Supervisor replied that she had cleaned some of the walls and the floor but did not remove any of the food products from the room. Administrator stated there was no need to remove the food since they had fixed the problem. He also added that moving the food wouldn’t do any good since there were rats and cockroaches in every restaurant and building in Florida, and “for every cockroach or rodent that surveyors find, you  expect us to shut down the kitchen.” He then added, “This would have never happened if we had not terminated that employee last Thursday; that is why I am in trouble.”

A Failure to Communicate

Based on observation, interview and record review, it was clear that this community failed to communicate about the rat problem and prevent the potential spread of harmful bacteria and viruses generated from rodent infestation in the dry food storage and central supply rooms. This put vulnerable residents at great risk of health problems related to rats. In the final installment of the series, we will see what citations the community received and what, if anything, they did to get out of jeopardy.

How much do you know about food safety? Find out here.