Stories from the Front Lines of Food Safety: Rats in the Kitchen: Part 1 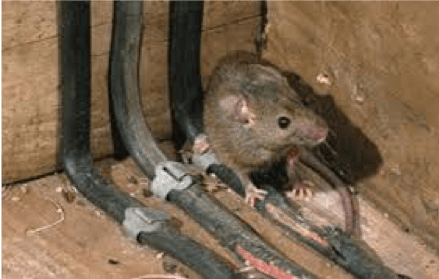 “There are rats in the kitchen of the nursing home where we work,” read the anonymous complaint submitted to AHCA (Agency for Health Care Administration), the agency where I worked as a surveyor. If true, this was a potential violation of the Food Safety requirements and it was time for me to head into the trenches for the war against contamination.

Operation: Rats in the Kitchen

The Problem Area: The dry storeroom of the kitchen of the nursing home.

Invoices from the exterminator were reviewed; the exterminator was only coming to the facility once a month to perform routine pest checks. Noted on one of the December invoices, they recommended the facility repair all cracks and crevices on the interior, and exterior of the facility, which included the dry storeroom and kitchen. This recommendation was ignored by the facility, as when the surveyors entered the building observed no repair of any environmental surfaces of the interior or exterior of the building.

Kitchen staff member (A) stated something ate through the bread wrapper a week ago and that’s why the traps were there. She has not seen any evidence that the rodents had been back.

Kitchen staff member (B) stated,  “We have rats here.” When asked how she knew, she said that she heard everyone talking about it. She also said one morning she saw a dead rat in a trap but has not seen one since.

Kitchen staff member (C) stated that the rat problem started a few months ago. She said that there were always droppings on the floor and she often saw dead rats in traps (one she dubbed “granddaddy” was “as big as a raccoon.” When asked how many dead rats she has seen, she replied, “I stopped counting.”

Kitchen staff member (D) heard trapped rats squeaking several times within the last couple of months. She stated there were always droppings in the dry food storage room, but they picked them up. She said she goes in and out of the dry storage as fast as she can because she hates to see the rats.

The staff also said they had confronted the Dietary Manager about their concerns for months, but no intervention was put in place to prevent the infestation.

Administrator stated the infestation began when they renovated the front of the building which exposed the facility to unwanted intruders.  A swale for water runoff located in the back of the building also may have allowed entrance. He said at one time they caught rats daily. The pest control company supplied big bear-like traps to catch the larger rats. They did not want to use poison because the rats would eat it and die somewhere in the walls or ceilings, stinking the place up. When asked why he didn’t get a second opinion from another pest control company, Administrator said they were happy with the exterminator they had.

He also said they had cleaned and removed clutter from the residents’ rooms and that no rats had been seen or trapped in the resident care areas.

He stated the maintenance crew trimmed the trees around the building trying to eliminate avenues for the rats to enter the building and set traps.

Maintenance Assistant could not recall how many dead rats he had removed.

Director of Maintenance said he started working at the facility a month prior to the interview and, through word of mouth, heard that the rat problem used to be a lot worse.

During a more detailed observation of the dry food storage in the late afternoon, Administrator and I found more evidence of rats. When asked why the food was not relocated to another location, he said it was in packages, a statement that demonstrated a lack of understanding of how rodents can contaminate food (even packaged food) and that cross contamination can occur when such food was taken from the storage room into a clean kitchen to be prepared and served to residents. After this discussion, Administrator concluded the food should be moved or kept in containers.

Director of Nursing did not know anything about the dry food storage area having a rat infestation. He agreed it would be an important thing for him to know.

Administrator did not respond when asked if he was aware of the diseases rodents can transmit. His lack of knowledge put the residents of the community in Immediate Jeopardy.

Why this admission was so important to the safety of the people living in the community:

A review of admission records noted that 10 residents, due to pulmonary or other compromising diagnoses, were at increased risk of serious harm, injury or death from contracting diseases transmitted by rats such as: